The best leaders do not fly blind

Presidents cutting pensions might not lead to rioting, but when compounded with low wages and bus ticket hikes it might prove too much. Similarly, corporate presidents have ignored too many early weak signals and brought their corporations to a halt.

I do not think Chile's President Mr. Piñera would have gone through the ordeal of an election campaign only to provoke massive spontaneous protests against his policies. Yet, somewhere along his barely two years in office, Mr. Piñera misread his cues. Mr. Piñera is not alone, only a few weeks earlier Ecuador ́s left-leaning President Mr. Moreno faced a similar reaction to fuel subsidy cuts. In 2013 leftist São Paulo ́s mayor Haddad faced comparable riots in response to his proposed urban transport price hike, similar to the one that triggered the massive reaction against Mr. Piñera ́s own. As in Chile, in Brazil too, rioting spread like wildfire across the country. In all three cases, governments initially blamed their usual suspects and responded with repression; in an about-face, they later withdrew the price hikes. In Mr. Piñera ́s case, not without first throwing some of his ministers to the wolves.

Riots in response to price hikes seeking alignment with macroeconomic fundamentals have been happening for too long. So much so, that in 1985 Princeton University held a conference on the matter of “Subsidy Cuts and Political Instability.” Yet, then as now, and despite their recurrent violence, the protesters have not shown an articulated agenda beyond the revoking of the price increases. The protests have not evolved into new leadership or spokespersons, and therefore they do not immediately threaten political stability, though they do publicly embarrass the presidents and eventually undermine their capacity to govern.

Yet, the seemingly sudden rise of the rioting has helped it being dubbed as spontaneous, which makes them even more interesting, because it is hard to believe there is no way to predict them. Assuming the policies are worth implementing, one would want to predict a tipping point to avoid the riots and the loss of assets and lives. Figuring out a tipping point ought to draw the best policy-making minds. 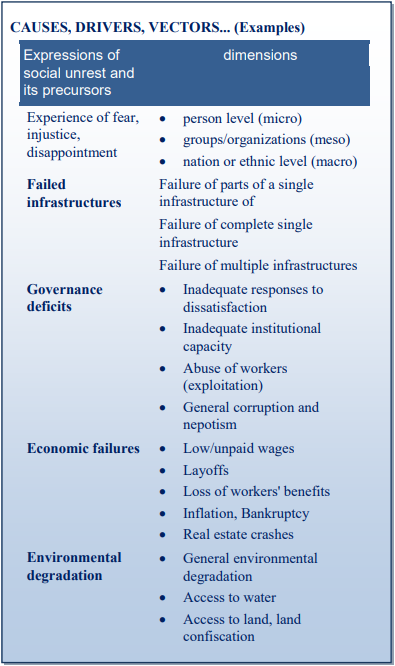 In the first place, it would be useful to admit that, like in the explanations for airplanes falling from the sky, there seldom is a single cause behind riots. Renn, Jovanovic Schröter (2011) have provided us with a compendium of possible reasons for social unrest, as per the table shown above. That suggests that even when the rioting seems spontaneous, it might be the result of frustration and anger in response to perceived grievances on various fronts. Nonetheless, Bienen and Gersovitz suggested (1986) that between a triggering instance such as a price hike and rioting there might be only five days, which suggests some spontaneity. The diffusion of social media since the Bienen and Gersovitz piece may have substantially shortened the gestation period. 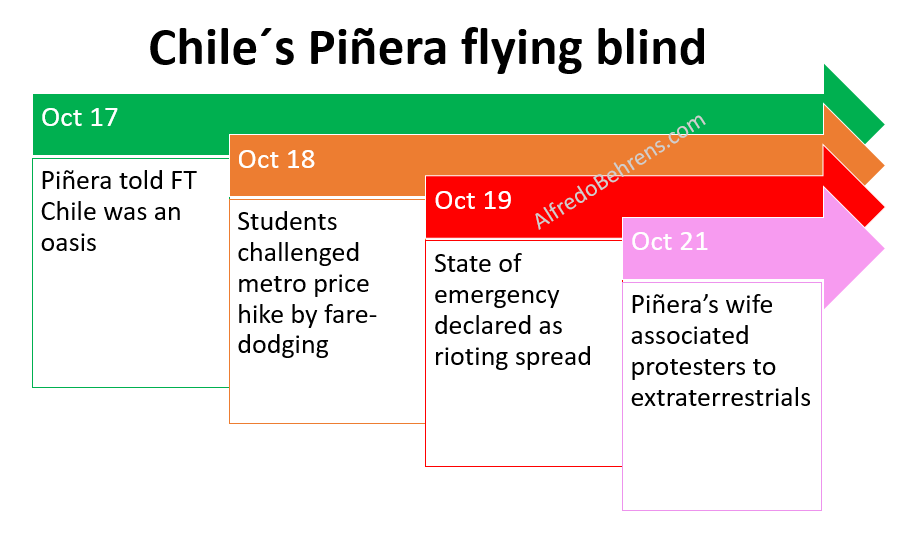 What we have at hand are raging crowds that have the capacity to destabilize any authority and which are prompted into action with little warning, as if coming out of nowhere. Shortly after Mr. Piñera referring to Chile as an oasis, in an interview to the Financial Times (Stott & Mander, 2019), Piñera’s wife was caught referring to the rioting crowds as extraterrestrials. In the 1930s Canetti (1984) referred to the Nazi rioters as swarms and that metaphor has stuck in professional literature (Henkel, 2017). The destructiveness of the swarm metaphor is useful, but also useful is the concept of the swarm as being headless. The latter renders useless the conventional repressive response of arresting perceived riot leaders, hoping that will bring the rioting to a halt. It should be better to elude the rioting altogether. This requires reading the cues to figure out how to tame brewing anger and resentment.

Not perceiving the weak but early signals of anger and frustration is something policy makers share with business leaders who fail to see early warning signals of threats that might bring failure to their companies. Kodak did not see the business implications of digital cameras that brought about its demise. Similarly, with Xerox and with so many other now ghost brands. It may well be that the power that comes with the presidential seat, whether in politics or business, blinds leaders to what matters most for their own survival. While power might blind the leaders, it should not also blind their policy makers any more than it should blind business executives.

Behrens, A. (2019). Use all your senses to make sense. https://www.peoplematters.in/article/futureofwork/use-all-your-senses-to-make-sense-22264

Henkel, Scott (2017). Power, the Swarm, and the Literatures of the Americas. Jackson: Univ. Press of Mississippi.