"On the Islam/Koran" and our colloquial connection to "Lorenzo Lamas?"

New email yesterday, I'm trying to drive home the idea that we're ignoring obviously immoral things--for no reason.  On the list:  Hiroshima, Nagasaki, punishing people for "smoking/drinking" ... making thousands of copies of Earth and not caring that you're making slaves of yourselves; or ... ignoring a message that "a Fork in secret" is the beginning of a bulb ... in secret... 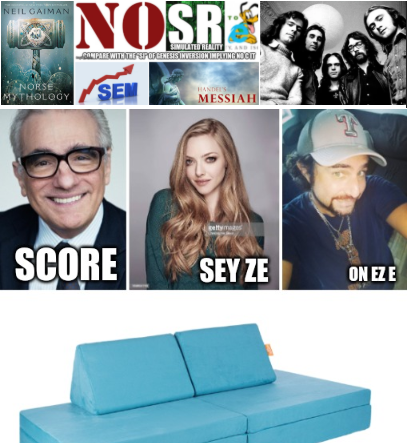 a book written by ____ for a sect of people who believed in "no god but Allah" who then decided that Allah is all of them--they're all Gods, and the only person who isn't one is Jesus Christ.

Filling in the blank, it is the fabvled #ASSIM who I've always said were the authors of this book--something like a supermegajump from people to "almost actually God" as in he ate them, made them just like him--in belief and spirit etc. Basically an instant "you are me."

Norse myth traces the origin of the jötnar to the proto-being Ymir, a result of growth of asexual reproduction from the entity's body. Ymir is later killed, his body dismembered to create the world, and the jötnar survive this event by way of sailing through a flood of Ymir's blood. The jötnar dwell in Jötunheimr. In later Scandinavian folklore, the ambiguity surrounding the entities gives way to negative portrayals. 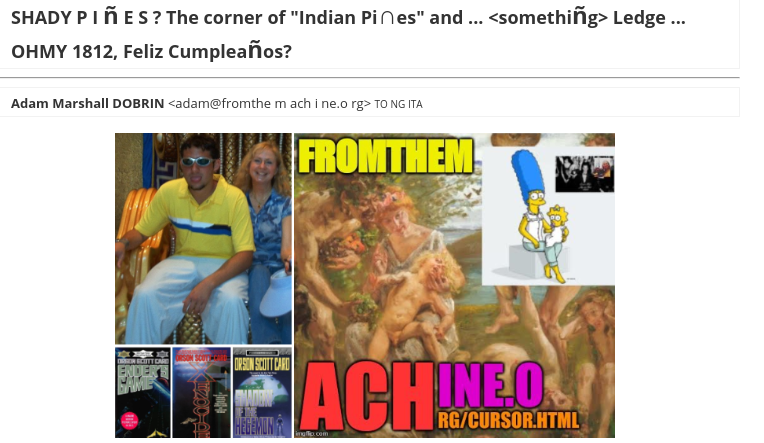 In Old Norse, ǫ́ss (or áss, ás, plural æsir; feminine ásynja, plural ásynjur) is a member of the principal pantheon in Norse religion. This pantheon includes Odin, Frigg, Thor, Baldr and Týr.[1] The second pantheon is known as the Vanir. In Norse mythology, the two pantheons wage war against each other, which results in a unified pantheon.

The cognate term in Old English is ōs (plural ēse) denoting a deity in Anglo-Saxon paganism. The Old High German is ans, plural ensî.[2] The Gothic language had ans- (based only on Jordanes who glossed anses with uncertain meaning, possibly 'demi-god' and presumably a Latinized form of actual plural *anseis).[3] The reconstructed Proto-Germanic form is *ansuz (plural *ansiwiz). The ansuz rune, ᚫ, was named after the Æsir.

My special word 'ASSIM" which dissects as "as sim" is a corruoption of the singular Norse for "God" and the Hebrew pluralization "IM" you can see here in YELADIM, which I read as something like "it's multiple." 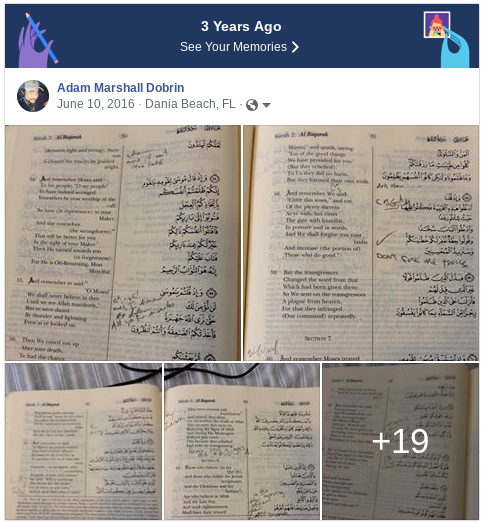 ayudame: "follow me on Facebook User"
Commenting just a little bit about "what religion actually is" my initial interpretation is to say God's a little lazy--putting little pockets of truth in very small places for the large crowd to see later--places like Norse mythology, Greek mythology and Jewish/Arabic Abrahamic religions.  Thinking about it a little more, I sort of wonder if he was trying to preserve history as much as possible--to show us that the lessons and messages he presents to us are actually based on behaviors that existed before religion--my interpretation of "darkness" as in, the timeline wasn't "fully re-run" but rather changed in ways like "PREROGATIVE" and "TURMERIC" and/or what I'm suggesting would be a "shocker" Q TO NORTHEAST ... and then waking up with nobody having heard the song ...
Ramble On .... (LED Cavendish Blimpies) <music
but now seaeing it's very much akin to Every town is Babylon <music (Live / Eddie Kowalski (sp?))

If you personally remember hearing the song Ramble On in the 70's or 80's or 90's I'm very interested in hearing from you, and whether or not you likened it at the time, (or now) to "Babble On" and the tower of Hanging Gardens to Babylonian Law.
Here's Taylor Momsen on "can I borrow the car keys" and also Ugly Shoeless Kid Joe on same. <music <music

commenting: I should probably rewrite this to include "jumping out of a leaf on a branch of a small Twiggy and suggesting all leaves must be saved or ..." or you'll be wondering why "BULB" and "HUB" are connected to "who ...?" as in literally you can't say B "in the Hub" connecting a million copies of the same f'iing thbing because "that's what LC would do..."
Jun 3, 2017 at 11:27am
The Question that drives us Home

A long, long time ago; in a place so far from here there is no path in timespace from here to there... on a planet called Cherrynoble, and before that Kyshtym, and before that Mayak; savress named Backiam was born into a world that had been laid desolate by nuclear holocaust, by toxic waste, and by an invasion of ants the size of pickles.  The remnant of their people lived in a few small camps that are about as close to our cities as anything else in their world, though there was nothing to buy or sell, no toys, no computers, and no cars.  They worked each and every day in laboratories with only one goal in mind, to build a machine to travel back in time and reverse the cataclysm that had destroyed their once flourishing civilization.

Progress was made, and first terminals were built that allowed the past to be viewed like a television show; a team called Pastwatch was created in order to search for the most opportune possible moment to change their past, avert the series of disasters that had befallen them, and to build a better future.  While they prepared, a virtual world was built as a sort of Ark to carry all the living souls that remained alive back into the past, so that they could live again in this new world.  A singular point was never decided upon, but rather a transitional period that began with few changes in the distant past, and then much more frequent and bigger changes as they approached the time of the cataclysm.

So as not to make any mistakes or errors, and perhaps as the biggest error of all--or the saving grace of everything that is; the Pastwatch group decided to run a simulation in their virtual time machine to ensure that they were successful.   It was not days, but years that went by as they prepared to "make the leap home."

In that very first year, the machines scoured through the history of everything and made a virtual copy of each and every soul, and imported into the machines memory.

In the second year, a message was written down, an explanation of what had happened to their world, and a plea to change the practices that had created the problems that destroyed the world.   This message was delivered to the virtual world signed "Everything that Ever Was" and presented as a scroll nailed to the inside of the front door of each and every home.
Much to the surprise of Pastwatch, each and every single message was taken down and thrown away, nobody had even read a single word.

On the third day of Creation, this same messages was coded and hidden within a book, and along with that book a number of historical events were slightly modified; direct changes to the memories of those that had experienced them so that these events would serve as waypoints on the path to change.

On the fourth day, the names of each and every person were changed to protect the innocent, and the coded message continued; now being hidden in the names of the changed events and the people who witnessed them.  In every name, another sentence, another clue to seeing not just the waypoints but the entire map of what had happened and advice on how to make it better.

In the final hour of that fourth day, a reckless young programmer queried the machine to answer how many of the events were solved and how many of the people involved had successfully transitioned from the virtual reality to the much more advanced world that Cherrynoble had created for themselves.  The young man asked for a result with such a high certainty, that the machine had no choice but to run a full simulation; each and every consciousness inside the machine was active and sentient; and the machine wrote a message on the skies above the world whose name had changed to Earth.  With only minutes left, a number of possible welcome messages were debated... I mean, were run through a secondary simulation by the machine; and with only seconds remaining, this is what the entire world saw:

For your second J, connect these points: 1) this very moment in time to 2) the Hanging Gardens of Babylon to Adam of Eden, and 3) the city Ur to the words "you are" and the questions that drives us...

"what is the beginning of Civilization?" and "Y?" 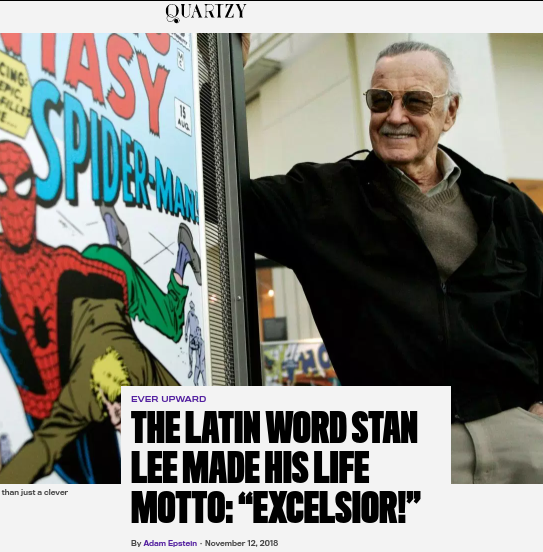 "an no tat ion" anno notayshun!