The Virus Changed the Way We Internet

Stuck at home during the coronavirus pandemic, with movie theaters closed and no restaurants to dine in, Americans have been spending more of their lives online.

But a New York Times analysis of internet usage in the United States from SimilarWeb and Apptopia, two online data providers, reveals that our behaviors shifted, sometimes starkly, as the virus spread and pushed us to our devices for work, play and connecting. 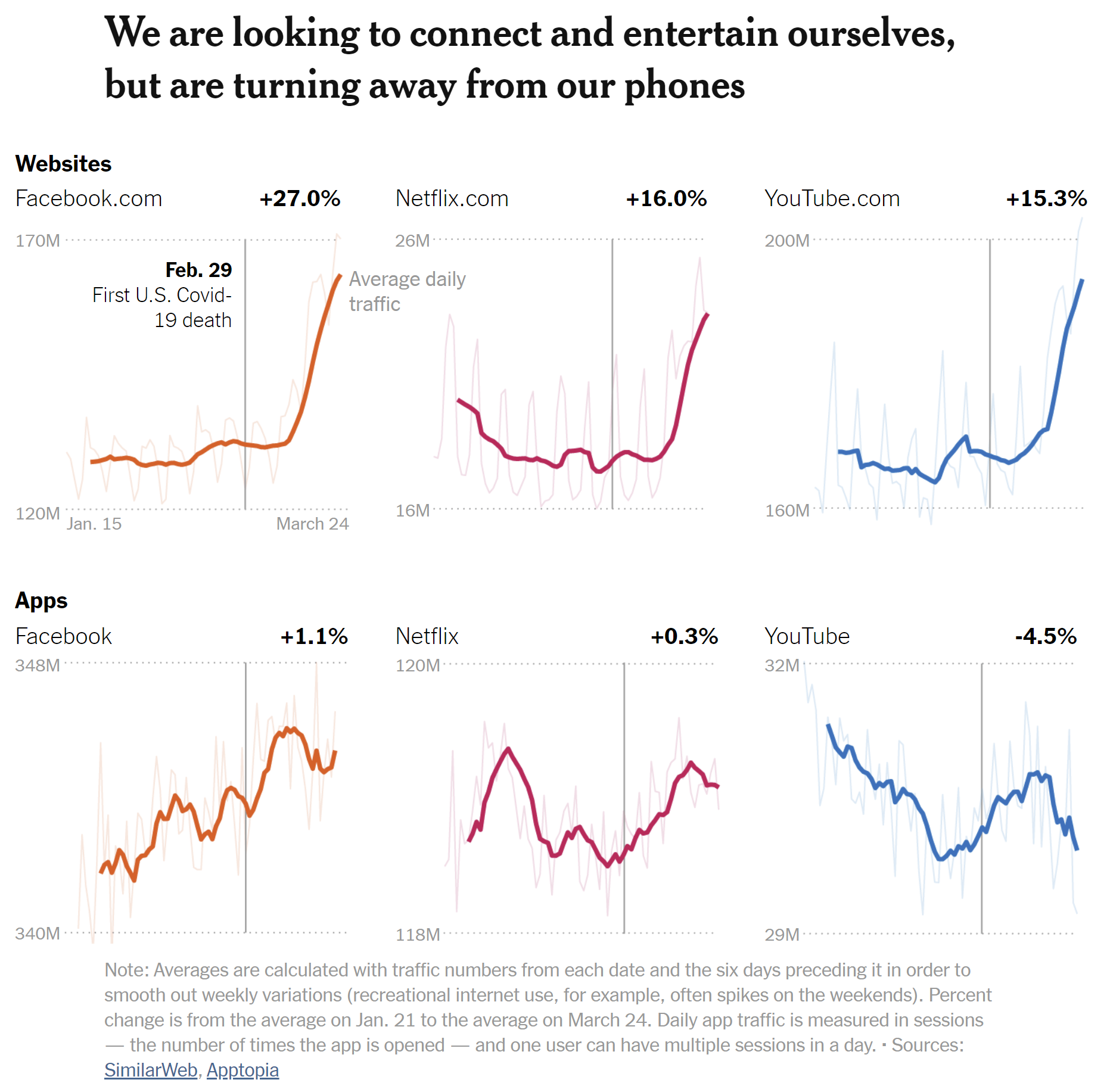 In the past few years, users of these services were increasingly moving to their smartphones, creating an industrywide focus on mobile. Now that we are spending our days at home, with computers close at hand, Americans appear to be remembering how unpleasant it can be to squint at those little phone screens. 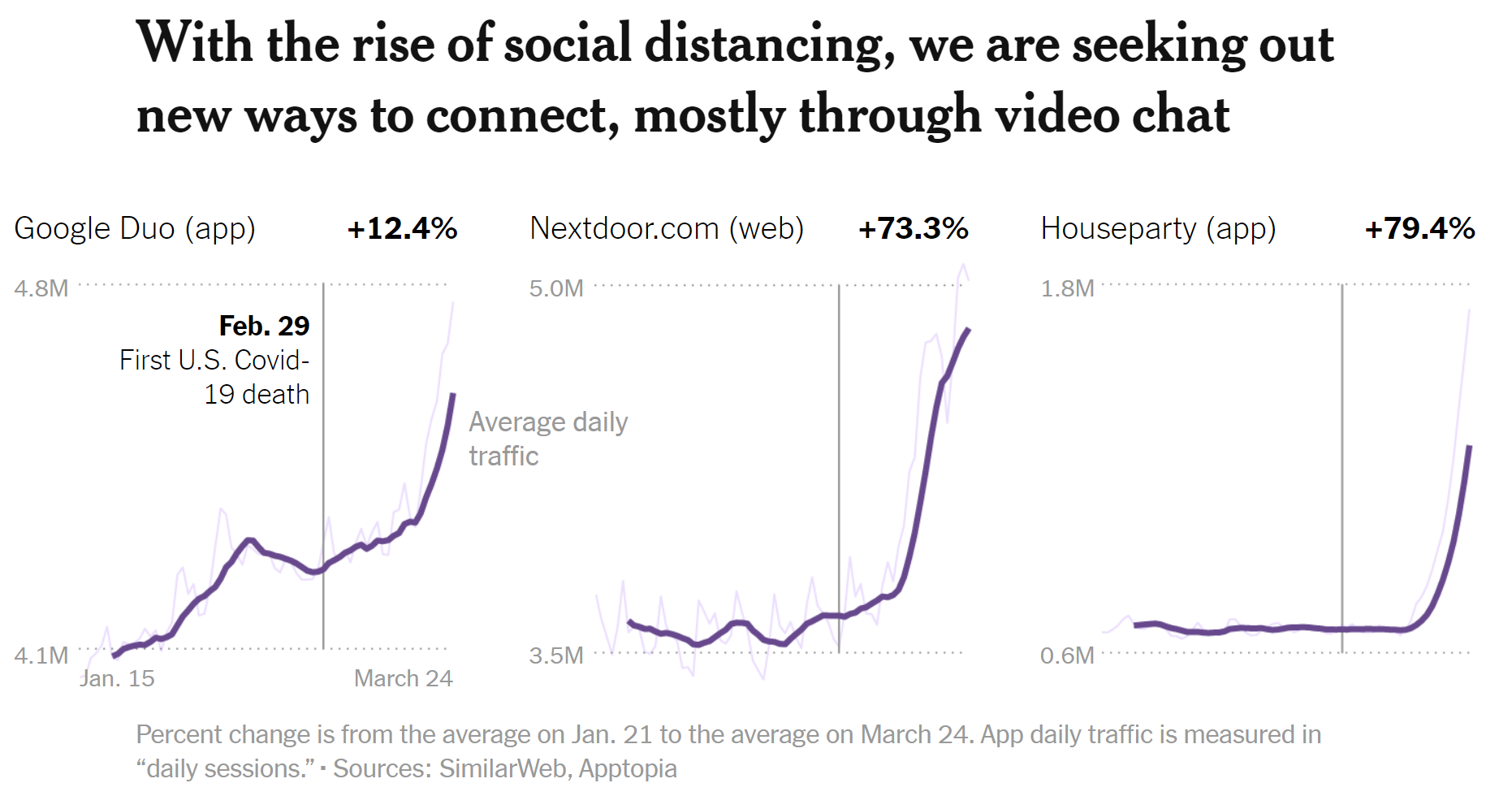 While traditional social media sites have been growing, it seems that we want to do more than just connect through messaging and text — we want to see one another. This has given a big boost to apps that used to linger in relative obscurity, like Google’s video chatting application, Duo, and Houseparty, which allows groups of friends to join a single video chat and play games together.

We have also grown much more interested in our immediate environment, and how it is changing and responding to the virus and the quarantine measures. This has led to a renewed interest in Nextdoor, the social media site focused on connecting local neighborhoods. 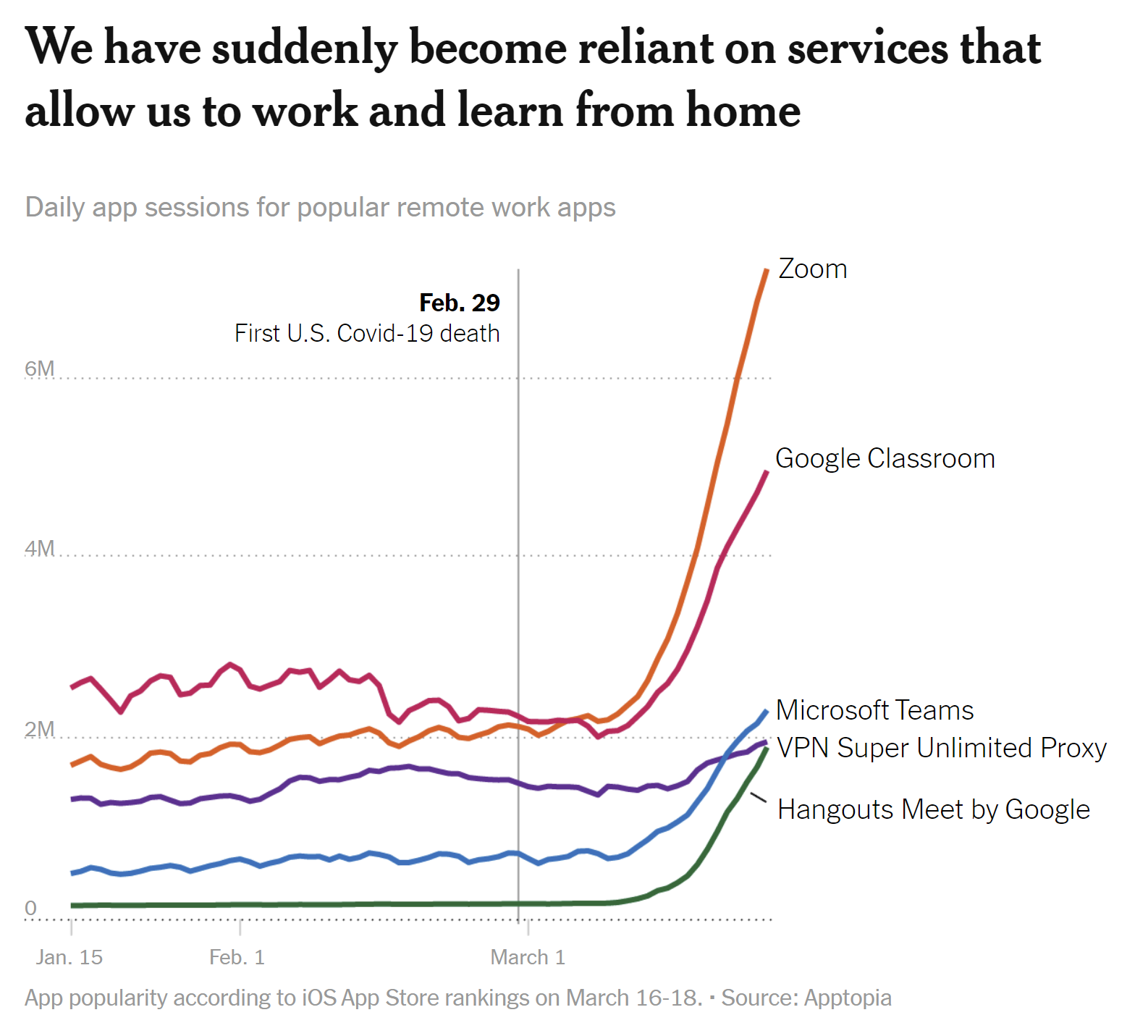 The offices and schools of America have all moved into our basements and living rooms. Nothing is having a more profound impact on online activity than this change. School assignments are being handed out on Google Classroom. Meetings are happening on Zoom, Google Hangouts and Microsoft Teams. The rush to these services, however, has brought new scrutiny on privacy practices.

The search for updates on the virus has pushed up readership for local and established newspapers, but not partisan sites 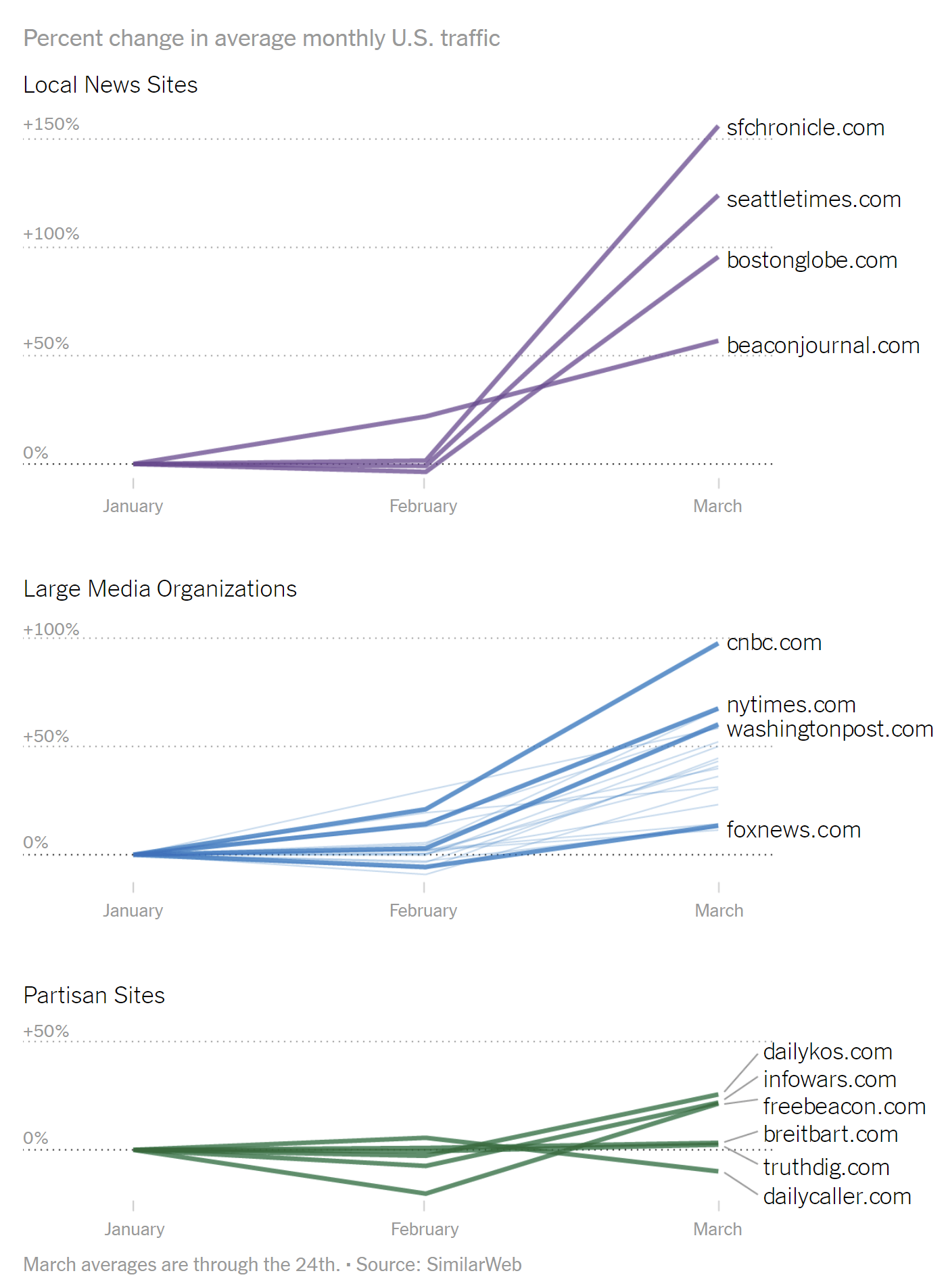 Amid the uncertainty about how bad the outbreak could get — there are now hundreds of thousands of cases in the United States, with the number of dead multiplying by the day — Americans appear to want few things more than the latest news on the coronavirus.

Among the biggest beneficiaries are local news sites, with huge jumps in traffic as people try to learn how the pandemic is affecting their hometowns.

Americans have also been seeking out more established media brands for information on the public health crisis and its economic consequences. CNBC, the business news site, has seen readership skyrocket. The websites for The New York Times and The Washington Post have both grown traffic more than 50 percent over the last month, according to SimilarWeb.

The desire for the latest facts on the virus appears to be curbing interest in the more opinionated takes from partisan sites, which have defined the media landscape in recent years. Publications like The Daily Caller, on the right, and Truthdig on the left, have recorded stagnant or falling numbers. Even Fox News has seen disappointing numbers compared to other large outlets.

Beating all of the news sites, in terms of increased popularity, is the home page for the Centers for Disease Control and Prevention, which has been attracting millions of readers after previously having almost none. Over time, readers have also looked to more ambitious efforts to quantify the spread of the virus, like the one produced by the Johns Hopkins Coronavirus Resource Center. 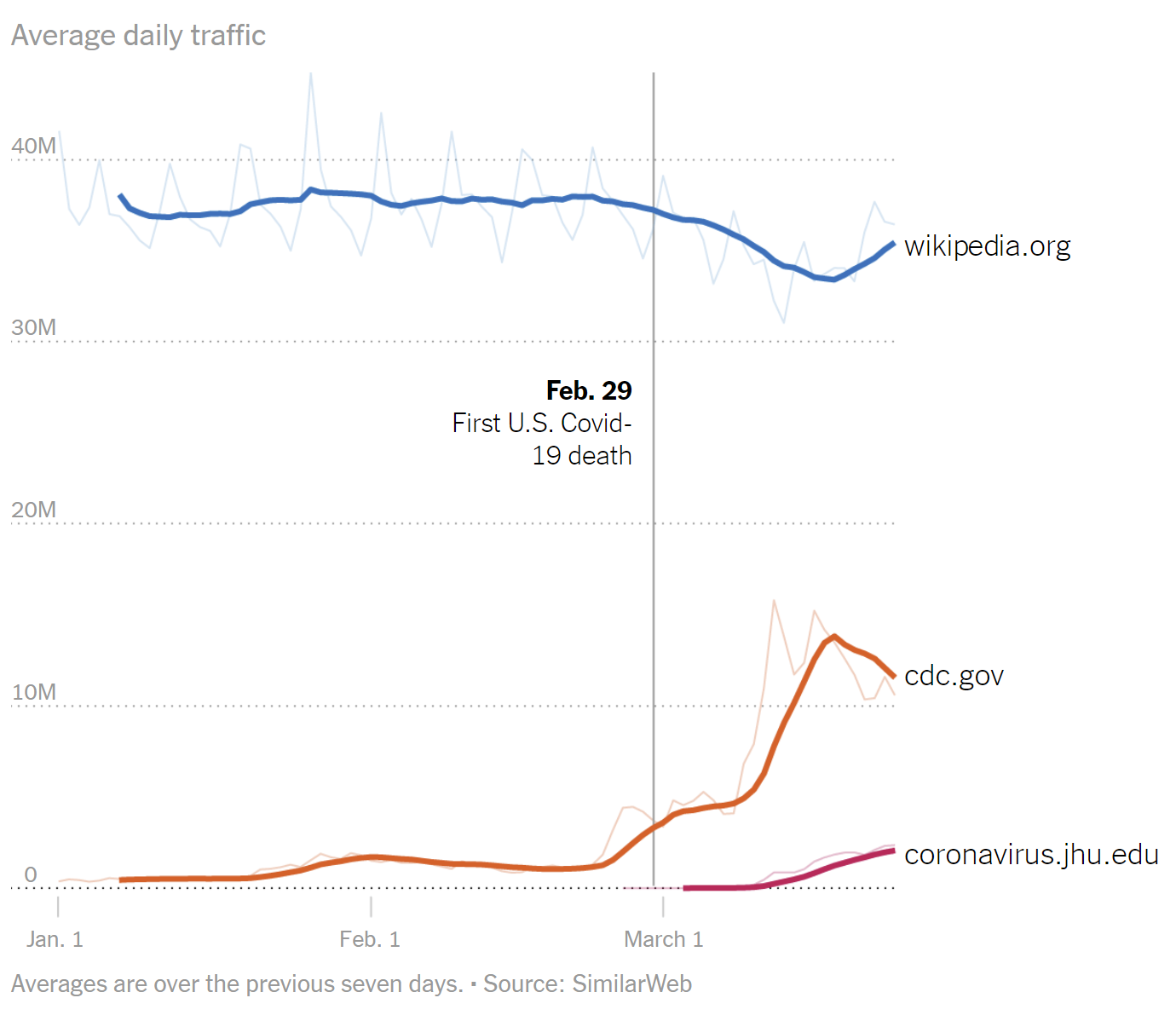 The single-minded focus on the virus has crowded out the broad curiosity that draws people to sites like Wikipedia, which had declining numbers before a recent uptick, data from SimilarWeb shows. 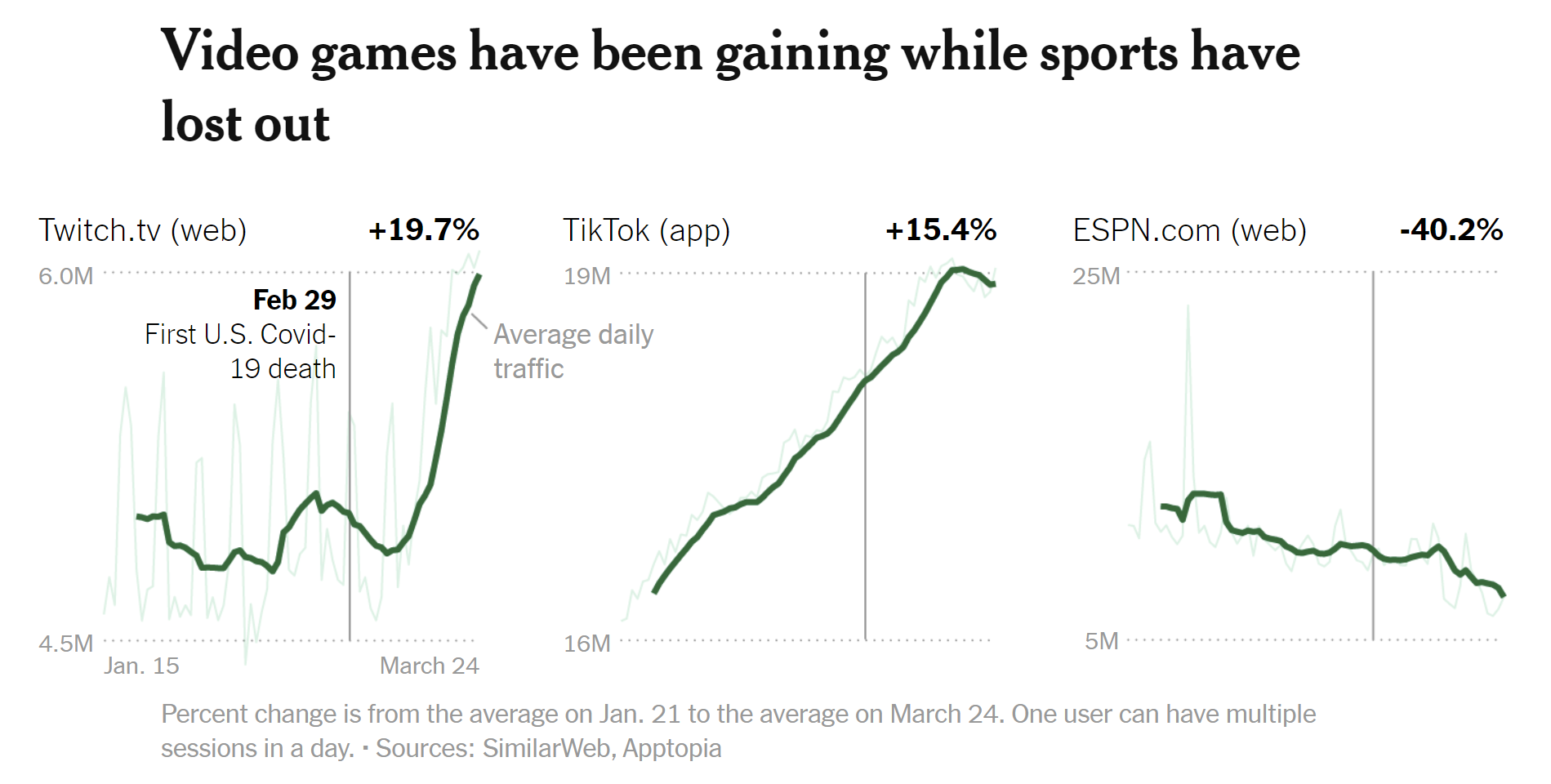 With all major-league games called off, there hasn’t been much sports to consume beyond marble racing and an occasional Belarusian soccer match. Use of ESPN’s website has fallen sharply since late January, according to SimilarWeb.

At the same time, several video game sites have had surges in traffic, as have sites that let you watch other people play. Twitch, the leading site for streaming game play, has had traffic shoot up 20 percent.

TikTok, the mobile app filled with short clips of pranks and lip-syncing, was taking off before the coronavirus outbreak and it has continued its steady ascent ever since. It can be nice to see that at least some things remain unchanged by the crisis.